And so my blog returns!

Look, I won’t make any promises as to the frequency of what follows this post. I’ll just say that I’ll be more regular. A vague promise that when I have something to say, and when the time suits, I might, just might, possibly sit down and type something.

Honestly though, I’m already regretting this. I have a new laptop and the keyboard is getting my goat. Let’s see how this goes.

So a brief review of up to now- Long time readers/followers will know that a number of years ago I stopped competing. There were a number of reasons. I was injured and in need of surgery I couldn’t afford the time to recover from for one. And I had completely lost the grá for competition. If I’m honest, I had lost a lot of confidence too. I was never blessed with a lot of self belief in my athletic abilities, but I was in a bad cycle a few years ago.

Let me tell you how bad it got. One night, when I was due to compete the next day, I ordered a huge takeaway and had about 4 beers. Maybe you’re sitting there thinking “Oooh! Four whole beers! Watch out George Best, there’s a new rival in town.” But for me, it was an act of self sabotage. A gesture that said “Fuck it, I’m going to lose anyway, so I might as well stack my excuses up in advance.” Guess what? I lost. But it didn’t matter because I’d eaten like a pig and drank some cans the night before.

Get it? It’s so easy to lose when you can tell yourself something comforting, even if the comforting thing is terrible! As long as it’s slightly less terrible than saying “I put everything into this and I still lost”. That’s all you need to get by.

I did other things around that time too. Entering only at the last minute. Not training with minor injuries. Going up in weight to avoid having to diet and so on. All of those might seem minor but I know what they really were. 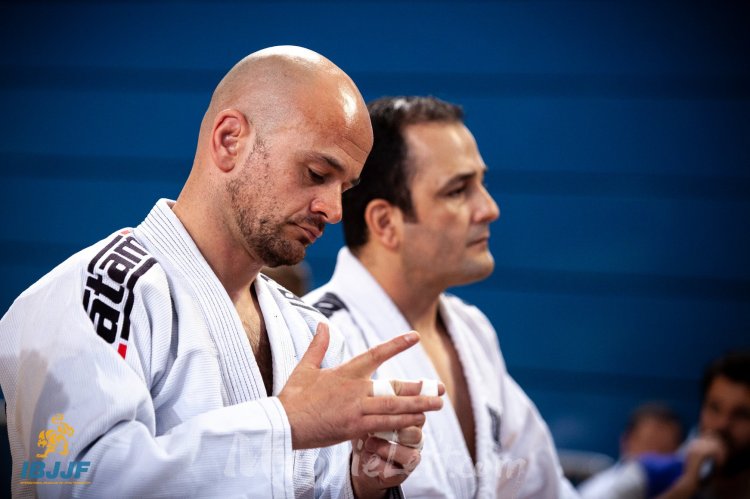 Now the worst feeling in sport is to put everything into something and STILL come up short. You can dodge that feeling with my helpful guide to Cognitive Dissonance above. Try it. Feels good until you’ve to look in the mirror.

Of course, none of this is important right? You’re just a guy, doing a sport, in a backwater of the sport, at minor league level. Who cares?

Well in that case, why do it at all? Why not just join the lads in the pub, on the couch. Is Gogglebox on? Stick a frozen pizza in the oven.

And it’s a cycle. A negative cycle. Your standards slip ever further on each spin.

You can enjoy it AND do it properly. And you can take perverse enjoyment in having to improve on your losses.

I went back competing after a 4 year break when I was 39. I was lying in a hospital bed having finally bit the bullet on that surgery when I signed up for a tournament that was happening 6 months later on my phone. I didn’t even know if I’d be able to train after the operation but I needed a goal. I did it, took silver, and I’ve competed at every opportunity work has allowed since. And I’m taking it very seriously. Sparring, drilling, strength and conditioning training, and of course, making weight. No more night-before takeaways.

I lose sometimes! Even at 41 and in Masters 3, it feels bad to lose. This black belt business is hard! But every time I do, I take a note. It might be a position I got caught in, or it might be (as in my last tournament) a mental mistake. And each time I get something that I can pass that on to my students, and improve myself.

I’m in great shape at the moment as a consequence. I was never badly out of shape, but I could have worked harder. It’s easy to cruise. I need targets, I’m like that. I love training for training’s sake but you need a boot out of your comfort zone from time to time.

And here’s something else! It’s great craic being around people who are doing it too. There’s a great buzz in training when you’re going for something together. It makes you work harder, and no one really objects when you try to murder them, which is nice.

I love Jiu Jitsu and I don’t know where I’d be without it. And I’d love it even if I wasn’t competing. But getting back to competition has given me a new lease of life and started to improve me once again long after I thought the improvements were over.

I will see you on the mat very soon.

« Yes, I now do a podcast…
My Lockdown Training Plan »