If you love conditioning, put your hand up

Good ould session this morning, was missing a couple of fighters due to Haloween commitments but they’ll pay for that on Monday night. Today looked light on paper actually:

But I wouldn’t let this put you off purchasing a Dyna Band, who in fairness do not have what we were doing today listed as one of the exercises you should do with them. I think you’re supposed to do bicep curls with them under your feet or something like that. I felt like vomiting during the sprints. I think it was because I had no breakfast this morning and had a load of jellies last night. We do this thing every year in my house where we buy about 7 or 8 tonnes of sweets and then 10 kids call. I helpfully ensure that the sweets don’t go to waste. At the moment there is a tub which weighed 1000grammes when it was opened, and now weighs about 500. That means that I have eaten half a kilo of jellies since yesterday afternoon. My son helped a bit but not much. I expect I will have completed the task of eating the full kg by Monday, I’ll keep you posted. 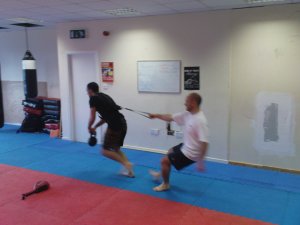 After the band snapped, we switched to the webbing strap which did far better. By the way yes that is a kettlebell in Aaron’s hand, not his handbag, and no we weren’t using it just to be unorthodox it had a very specific purpose. Sometimes in Ireland you have to fight in hostile places so it’s important to be able to move quickly with your trophy in your hand. See, it’s functional.

http://www.blogger.com/img/videoplayer.swf?videoUrl=http%3A%2F%2Fvp.video.google.com%2Fvideodownload%3Fversion%3D0%26secureurl%3DqAAAAPCZD0ddCGBZjZs6HcCGJYeIK43_jtGXJvpgcQlPbM1y1X0y5JiFtiPMLcNs_cHrV137U7Ha7FRX9WWr7keSCTZHiIAGF48bp1WY1G_uwoShkp-mtjBMMFLBgJzuIHHgu2O4-GE19OskP5v9o5o24cj_CcMt-QOhQZ3heLsPxobxjZuCJprIEx3XuWibrPd8lT1etJPSHG0klq1Lhl_1PMMpZHd1Q_XIOQP7o0aOOcrt%26sigh%3Df-GJ9rEzmlRy6bhK81C6qGiiYwY%26begin%3D0%26len%3D86400000%26docid%3D0&nogvlm=1&thumbnailUrl=http%3A%2F%2Fvideo.google.com%2FThumbnailServer2%3Fapp%3Dblogger%26contentid%3D4d0525f55a46a4a4%26offsetms%3D5000%26itag%3Dw320%26sigh%3DsM44WQz2lPwclezcn19Mqz5pP1s&messagesUrl=video.google.com%2FFlashUiStrings.xlb%3Fframe%3Dflashstrings%26hl%3Den
So as you know, girls should always train seperately to blokes, and should never spar with them, and can’t do push ups or their womb will fall out, and if they train too hard they’ll get all muskly an ugly and all of that. Sorry about the bad quality of the video, but since she’s started training Amanda has got so muskly and ugly that all of the video I take of her has to be low quality for decency’s sake. That’s Paddy’s ghey headguard I was talking about earlier but the man got a wee cut a week back which I was reluctant to talk about in case of the unlikely event that his opponent reads my blog. Well, stranger things have happened. There was a guy passing secrets to the Russians on the Manhattan Project y’know.

I can’t imagine this going down well on the Joe Duffy show but I think it’s a nice message. I remember telling my mother I was an atheist. I could have said, “Ma, I’m a homosexual heroin addict and I shot the pope” and it would have gone down better.

2 thoughts on “If you love conditioning, put your hand up”