I really, really, really love Jiu Jitsu. Words alone cannot explain how much I love to wrestle, so I won’t waste any more on trying to express that. Last night I rolled for the first time in a month or so and it felt great to be back…. for two rounds. Then it started to feel tiring to be back, then sickly, then exhaustion kicked in. I’ve actually been hitting pads and doing okay (I thought) with my shin injury but then it’s easy to forget how distinct fitness for BJJ is from anything else. You can do all the cardio you want, LIT, HIIT, SHIIT whatever, but nothing NOTHING prepares you for tough grappling rounds like grappling. Last night I tried to push it out for the whole night but by the end of the evening I just lay down and panted and let people crush me. But it felt fantastic to be back on the mat doing instead of watching. We did very little technique except for two cool gi techniques that Scotty had picked up at the Braulio Estima seminar last week. I will definitely be using the under the leg collar grip triangle/omoplata set up. Thanks Scotty, and by extension, Braulio! All in all we rolled from 8pm until 9.20 in 5 minute rounds with just about 10 minutes aside for technique in the middle.

In gym related news, there are some new space on the timetable opening up soon on Wednesday and Friday. I’ve been subtley hinting at the Kiddie Krippler to open the gym on a Wednesday for an extra class but he’s not biting. I mean, he does nothing when he’s here the other nights, look at this photo! He needs a cool coaching pose like the one on the right I took earlier. 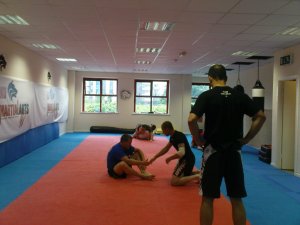 Someone asked me a question about what I do with levels in my classes. In other words since there are loads and loads of levels of experience in each class, how do I cater for them? I always thought that I was among the only ones who had this problem, since my sport is individual and others like football could train in a team and not worry. But then I was talking to a rugby coach and as he put it, he has little boys and big boys who he has to cater for in training. A 115kg prop forward’s session is going to be radically different to an 80kg scrum half’s. So I stopped moaning about that. I can still moan about something else though which is the year round phenomenon. People join us year round and there’s no season. New players might join a soccer club in summer and do pre-season with them, but rarely in December. They’ll also rarely have adult beginners, people totally unfamiliar with soccer. They’ll NEVER have people join who just want to train with the team when they feel like it and don’t want to actually play. So in other words, I still have plenty to complain about, and it’s a coaching challenge to merge these people into one class.

First of all, everyone does the same work. It’s a rare occurrence to see me split the class in any way, the exception is usually when I want people to spar, then I’ll get beginners doing some extra pads or the like. Splitting classes is sort of a bee in my bonnet. It’s a symptom of bad planning. I know there are always occasions when you have to do it, but if it’s regular it just creates a divide. I’m not talking about weight classes here, which is a practical safety measure, but about some sort of experience split like beginner/advanced. With partner work, what I’ve found is that everyone sort of drifts towards their own level in any case. If you ask people to find a partner, they usually look for someone who joined around the same time they did or who is around their size. This method has it’s problems too, as sometimes you have to move people out of their comfort zone but it’s a decent rule of thumb. Secondly, without getting mushy, the gym is a family. A really smelly, sweaty family that you would disown in public. (That may remind you of your real family) When you walk in for the first time, you train beside the guy who’ll have a pro fight next week. You might not do all that he does in a week and of course he’ll be in for extra sessions, but you’ll see him train, watch him do his thing. He gives to you by experience and you give to him by being there for support. There’s a lot more to this very complex topic but that will have to do for the moment, I have a 3 year old here who has to dress up as a ghost.

Oh almost forgot! LAAAAADDDDEEEEEEEZZZZZ….. Yes, I am an asshole because I said I was getting rid of the girls dressing room. There’s not that much I can do about that, we’re getting more equipment and we need more living space. Yes I know that Hitler said the same thing when he invaded Poland but I have more stylish facial hair so can you forgive me? If it’s any consolation, I believe that I may well be able to convince the chippie to build a doorway into the current storage area where we have the pads right now as I want to move the pads out of there. I will keep you updated, but I can promise nothing except I’ll try my level best to make sure you don’t have to change in the car park.

« So THAT'S where the gym is
If you love conditioning, put your hand up »

2 thoughts on “Oldness and Fatness BEGONE!”