A bit of an update on my own training

It seems I’m the only one in the gym really training for anything right now. Olli and Keith were the only fighters to show up for training last night as I think everyone is taking a bit of a break after their busy 12 weeks. Who am I to argue?

I hated that session but afterwards I felt great, and I can feel the fitness returning. There’s definitely a marked improvement in my back and my ability to engage my scapulae. I know this because on yesterday’s session I had a degree of control I didn’t have before.

Here is Thursday’s session:
Treadmill walk 6mph 6% incline for 15 minutes
Box jumps. Not too sure of the heights but basically up to a low box, down and back up to a high box and down was one rep. Concentrating on quality, with the smallest time possible in contact with the ground between boxes. 3x10reps
In between those was the YTWL with 4kgs dumbells, 3×8
Chest supported scap row/scap push ups superset 3×8
Laugh at Garret doing his rowing test- 2 sets of 1 (good for the abs)
Push up with knee tuck/pull ups with knee tuck – 10/4 reps, 5 sets.
In between that Will did some mobility work on my back and hip. Really, really sore but the difference in the ROM was unbelievable afterwards.
Turkish get ups 3 sets of ten each side- 14kgs and 16kg I think.
Then some ab rollouts supersetted with bicep curls for the guns.
Then BJJ that night, loads of rolling including schooling Grant and being schooled by Olli.

My thoughts on training with Will so far:
My back is far from healthy, but I can feel the difference and I think it’s improving. The YTWL work was noticeably easier and when I get to look in the mirror doing my band work I can see a difference in the control of my shoulder.
My conditioning is poor but getting there. I knew I’d let that lapse over the last couple of months but I also know it won’t be long before I’m in good shape again.
I’ll be interested to see my test results from my next test.

Diet wise, it’s terrible. I’m a pretty good cook if I say so myself however I haven’t been doing it enough as I’ve just been too busy. Meals have been on the fly or just ordered, a lot of petrol station sandwiches and pizza. I’ll be expecting the body fat digit to drop when I clean up the diet. Unlike most I don’t really gorge at Christmas. I like a big ass dinner on Christmas day but to be honest, it’s not that much more than I normally eat day to day. I eat between 4,000 and 6,000 calories a day although lately that’s been on the drop as I haven’t been training that much. When I’m not training I just don’t feel the urge to eat as much so it’s easy enough to cut down for me. In any case I went to the butchers yesterday and bought my next two weeks of meat, followed by a quick stop at my veg man and into the spice shop next door for tastiness.

Ah yeah, we’re losing Olli from the gym as he’s going back to Finlandia. That sucks. Olli is like the anti-me on the mat for BJJ. He does everything I hate people to do when I’m rolling with them so it’s been a great training experience having him here. He also smiles just about all the time (except during cardio!) so he’s been nice just to have around too. Best of luck Olli! 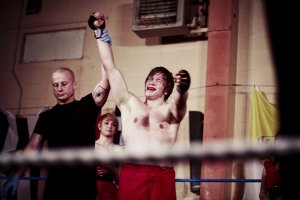