What is it about drug cheats that get our goat so much? Lance Armstrong, it would appear to me from my vantage point, is a liar, a bully, a cheat, and an egomaniac, and all of this would seem to add up to him being a pretty deplorable sportsman. However if he had admitted to letting the air out of his competitors tyres over the course of his 7 Tour de France wins, I don’t think the outcry would have been half as bad as it is right now. There is something about drug use that sets off the Moll Flanders in all of us.

Let me state that in no way am I condoning Armstrong’s actions. Drug use was against the rules, and regardless of how many were also cheating in the same races, he broke the rules. He cheated. His subsequent actions are far more deplorable however. Attempting to ruin the lives and careers of every journalist who investigated him, competitors in the cycling arena, and those who blew the whistle on his cheating has rightly exposed him to moral criticism outside of the arena of professional sport.

But I find the whole screeching outcry a bit nonsensical. I always do when a drug cheat is exposed. I’m sure I’m not the only one who sees inherent hypocrisy in turning a blind eye towards cheating and “gamesmanship” in sport on almost every other level except drugging. In fact, blind eye is the wrong term. We all see this cheating, and we don’t turn our back on it, we celebrate it (if it’s perpetrated by our team that is). How many times in a professional soccer match do players “fool the referee”? If it’s for your team, you’re delighted; you’ve won a penalty, and your player is just doing what everyone else does. If it’s against you, the player is a cheat and the referee is a moron. likewise, I’ve watched goalkeepers claw the ball out of the goal after it had clearly crossed the line and look innocently at the referee. If he doesn’t blow for the goal, no keeper has ever raised his hands and said “No, it crossed the line, award the goal”. If they did, they would be vilified by their team mates, managers and fans. They would probably be told they didn’t have the ‘mindset of a winner’.

Look at athletics. Everyone hopes that no one is on drugs, but most people accept that sophisticated drug use is rife within the sport, particularly among power athletes such as sprinters. But ask the average sports fan this question: “What if we could guarantee that every 100m sprinter was ‘clean’, but that the current world record would never be broken? Would you maintain your interest?” I’m sure everyone would instinctively answer “yes of course”, but the reality is that part of the allure of sport on this level is seeing the records being broken. The athletics fans would still tune in, but athletics fans don’t make Coca Cola their money back. The average Joe and Josephine tuning in once every 4 years does that, and the absence of a deeper understanding or love for the sport of sprinting, they want to see 9.58 beaten. I’m not a cynic by the way, having been around some professional athletes in my time, I can tell you that not everyone is “on”. I’ve met some athletes who barely knew what to eat for breakfast let alone what combination of chemicals to inject and what time of year, or rather who to call to tell them that information. It’s the same across the board. There are some natural phenomena out there who defy the what we consider the limits of human performance. But that doesn’t make sport clean, that just means some freaks are extra freaky.

For me, another interesting question comes after the event. If, for example, your team or favourite athlete was, in retrospect, adjudged to have gained an unfair advantage that resulted in them winning a championship, tournament, or otherwise, would you deem it right and true that the opposition be awarded the medals, or would you shrug and say “It’s all in the game”? If the TV replays clearly showed a footballer simulating a foul to get a penalty in the World Cup Final, the final wouldn’t be replayed, just as the famous “hand of God” by Diego Maradonna in the 1986 world cup didn’t force a replay (or indeed result in any sanctioning of any kind). Maradonna clearly punched the ball into the net in Argentina’s 2-1 victory over England in 1986. “A little of the head of Maradonna, a little of the hand of God” he joked afterwards. Eight years later in the 1994 World Cup, Maradonna was found to have Ephidrine in his bloodstream and was sent home from the tournament.* The intentional handball was tolerable, the drug was not. We don’t call for a replay if our one of our players on a rugby team rucks in an illegal fashion, something World Cup winners New Zealand’s (magnificent I should say) Richy McCaw is infamous for. We accept all of this and much more as “part of the game”.

Once again, just in case I haven’t hit you with this hammer enough, I am not condoning Lance Armstrong’s drug use or actions subsequent to that. I am saying that we are hypocrites when it comes to sport. We pick and choose what we deem to be acceptable levels of cheating and choose to either laugh at it as cheeky, or cheer it if it benefits us. We teach this to our young athletes either directly through coaching with a wink and a nod, or passively through tolerating this behaviour when they compete. Yet somehow we feel it’s okay to get on our high horse and screech when someone crosses our imaginary line and takes drugs. 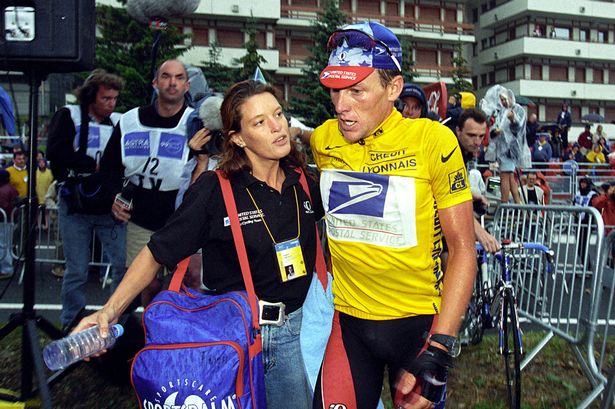 Now you might feel that a decade of planned and orchestrated drug use is a special case, and you’re right, but we don’t just respond this way when it’s Lance Armstrong. We’ve done the same for Marion Jones, for Michelle Smith, and for Ben Johnson as well as for countless others. Strangely, despite overwhelming evidence, we haven’t done the same for US hero and athletics poster boy Carl Lewis, but maybe it’s no fun destroying such a nice fella who did so much for the sport. Maybe Lance should have just kept smiling and sent some flowers to his ex-employees instead of trying to ruin them.

Finally, I’d like to give my opinion on why they cheat. For me, it’s simple. They take such huge risks because the rewards are also huge, and the difference between first and second place is so vast. Cheating let’s you be the most famous cyclist of all time, to gain multi-million dollar sponsorship deals, to be welcomed at every gathering, to have your face known the world over, to set up your own charity, to own houses the world over, to allow your children to never have to get a job, to mix with politicians and celebrities, to have guest appearances in Hollywood movies, to do whatever you want, when you want for THE REST, OF, YOUR, LIFE.

Second place is a nice medal and a job hunt once you hit 35.

*To add further intrigue to the money/drugs situation in sport, Maradonna subsequently claimed to have a tacit agreement with FIFA that allowed him to ingest the drug so that he could lose weight for the tournament. Believing this depends on your willingness to accept Maradonna as a credible source for, well, anything. If nothing else it’s an interesting footnote.

« Contacting me
Some stuff for you try »