This week I’ve had my mind blown from rolling with Rafael and Guilherme Mendes. As I said the week before the seminars, if you train BJJ don’t know who these guys are, then google them and the next time you’re talking to me, pretend like you knew all along. Put simply, this was another level, let me frame it for you a bit better with some info we gathered from them. I’m going to leave out the technical aspects of the seminar as they’re a little harder to put into words, but the training info was also golden.

They train 4 times a day (you didn’t misread that)

On their “rest” days, they still train, just lighter

They’ve been training since they were 12

They spend a huge proprtion of their time on repetition of technique, about 25%

Another quarter of their time goes into strength and conditioning

It’s tempting to look at those points and say “well, I can’t turn back time, can’t train 4 times a day and my rest days are spent doing overtime” and give up hope of ever reaching that level. As I’ve been telling people rolling with them was equal parts amazing and depressing to know how you can never even remotely be this good. Assuming I ever reach their level of technical mastery (that’s a big assumption!) I will be too damn old to use it optimally. But whe the dust settled I had a think about it and like all learning experiences, the real meat and bones of what you’ve learned doesn’t permeate until a while afterwards. 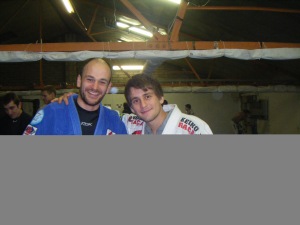 Number 1 I can’t train 4 times a day. I work at this gym and I still couldn’t do that for lack of training partners, time etc. But I certainly can train more than I am right now and I intend to. There is an open mat, all day every day until 7pm and sometimes afterwards, and how many people use it? You might not be able to turn back the clock to when you were 12, but you and I can certainly make better use of the time we have. We can make more sessions, make more arrangments to meet a partner and train and remember that both of the coaches in Informed Performance are here all day, they both keep their gis in the gym, and while they can’t necessarily train all the time, they might be able to roll with you if you ask. Even 1 or two extra rounds after training will add to your rounds in the tank.

So New Years resolutions, 2 months late? Lets roll on Saturday mornings/early afternoons. There’s a session set for 12 this afternoon and I think we should make it permanent. I’ll be there this afternoon and I hope you can join me. We’re going to go through some of the material from the seminar and then roll. Secondly, I’d like my purple belt this year thanks very much. I haven’t put very much time of effort into getting it or making any drastic improvements to my level, I’ve been too busy trying to get injury free. But now I feel almost 100% again for the first time since I broke my paw this time last year and it’s high time I put some more time on the mat.

Secondly, I can drill more. The guys spoke about how much of their time is spent on repetition. Like a lot of people, I tend to drill something until I have it and then stop. Most people in my classes are definitely guilty of this. (Yes I mean YOU *insert name here*) The guys mentioned that in their school, drilling is almost constant and that they train with the beginners almost as much as they train with black belts. I thought that was hugely significant. Here are these multiple times world champions at the peak of their athletic career and they love BJJ enough to roll with a white belt fresh off the street. It’s insane. But it might make some people in our gym think twice  about their schedule.

« Critical thinking
Pedal to the floor »

2 thoughts on “It was like rolling with two Yodas”